Cornbread is King in the South (as long as you don’t put sugar in it) and so is Lodge Cast Iron! Nestled alongside the Cumberland Plateau of the Appalachian Mountains in the town of South Pittsburg, Tennessee (population 3,300), it was here that Joseph Lodge and his wife settled, and, in 1896 opened his first foundry. Originally named The Blacklock Foundry after Joseph Lodge’s friend and minister, the company gained success until May of 1910 when it burned down.

Just three months later and a few blocks south, the company was reborn as Lodge Manufacturing Company, and was recently seen on CBS Nightly News and 60 minutes as cast iron has become the craze these days, especially with everyone into the TV food and Southern food movement. I also believe there is a resurgence in all things nostalgic, a bit more simple and American crafted – like Lodge.

Good thing for me I call NWFL the South – because it is, and I grew up on the Gulf Coast when not traveling the world with my family due to my fathers position as a Naval Officer. I’m a Southerner born and bred and have been given a true  gift- other than being salvaged from a head on collision- family generations of cast iron skillets. I cherish them all, even the new items from the LCI collection and their Enameled Cast Iron.

Having graduated from LSU, I received a purple Dutch oven that I use on game days to cook gumbo, jambalaya, soups, and stews to name a few, and fondly think of Mark Kelly (PR Manager of LMC) who sent it to me as a thank you gift for taking he and a guest to dinner at V Seagrove to meet friend and Executive Chef David Cunningham- also in the book with a recipe. Mark asked me to bring in a Pensacola chef as well, so I called on friend and Executive Chef Irv Miller of Jackson’s Steakhouse in Pensacola,  whose recipe on pages 184-185 is Tasso-Spiced Shrimp with Grits, Collards and Gravy, and is finger-licking good! My single servings of Jumbo Lump Gulf Crabmeat Au Gratin are great for the holidays and located on page 192, after Virginia Willis’ Seafood Chicken Jambalaya.

My Florida Cracker grandmother who later became a Georgia peanut farmer has a recipe in the book via my donation: Florida Blueberry Cobbler, page 261. It came from her sister, was given to my mother, and then to me and my sister, so you know it’s good- especially when topped with Vanilla Ice Cream in the heat of the summer. My husband too is proud of his collection of just a few skillets, and cooks cornbread weekly in his mothers skillet who has since passed. Cast iron connects us to family memories and the bond shared in cooking those family recipes. Each time we make cornbread together, we talk about his growing up in Birmingham, Alabama and how as a boy he loved to hear the sizzle of the batter as it hit the hot bacon grease in the skillet. It never gets old.

I am honored and proud to contribute to Lodge Cast Iron Nation: Great American Cooking From Coast To Coast as this is a book not just about the South or cast iron- it is a love letter of sorts from all of the contributors, literally from Coast to Coast, who are fascinated by cast iron, the quality, timelessness, versatility, cost effectiveness and know that it’s not just meant for cornbread.  The chapters include, breakfast, soups + sandwiches, poultry, meats, fish + shellfish, sides, breads, desserts, and how to take care and clean your cast iron.

The recipes in the book, curated from a network of award-winning food professionals, chefs, cooks, food enthusiasts, writers, bloggers and that of the Lodge and Kellermann family, are meant for a new generation of cast iron lovers, like my own two children ( I am hoping). It is published by Oxmoor House and so well edited by Pam Hoenig (I know as we had many phone conversations about my few recipes alone) who did an incredible job with the book. Many of the photos are from that of the Lodge Foundry family, but also from Helene Dujardin, Senior Photographer at Oxmoor House and blogger at Tartelette.

One recipe I was enamored with trying as temps are getting cooler, especially in the evenings, is the North Carolina Clam Chowder. This is not to be confused with New England Clam Chowder, and I have to admit I did adapt it just a bit. I used Apalachicola littleneck clams purchased from Joe Patti’s Seafood in Pensacola, and called it Gulf Coast Chowder- since that’s where the clams came from.

Note: If possible I would be buying them at Buddy Ward or Water Street Seafood as I love to visit Apalachicola, whose oyster population by the way is severely declining due to water wars with Georgia, salinity and over harvesting.

4 cups potatoes, scrubbed or peeled and cut into 1/2-inch dice

2 dozen small clams in the shell (such as littlenecks), scrubbed well 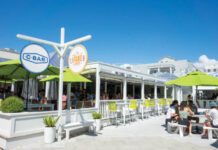 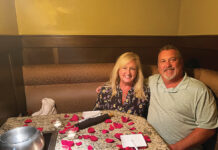